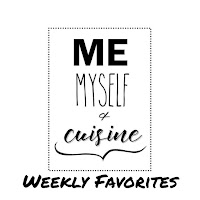 One of the great things about me getting behind in the blog posts, is that you get two posts in one day! Here’s another batch of weekly favorites. This week, it’s all sweets and desserts!

When you’ve got two little boys at home, you have to stay on your toes. Finding new snacks to keep them occupied and interested can be a challenge. This one they can even help make themselves!

Did you know that you can make Ice cream bars at home?! Check out my recipe, it’s super easy and delicious!! There will be a new video tomorrow, you don’t wanna miss it! 🍦https://t.co/o5KzA5glCy#baking #recipes #recipe #icecream #foodie #foodbloggers #foodblogger #veganfood pic.twitter.com/b60z1TlJ9m

This blondie has a few things going for it. The texture isn’t the heavy texture you normally get some blondies. I’ve had some that are more like a cookie bar than a blondie. These flavors mesh together so well and have that added sweetness after being dusted with powdered sugar. This actually looks like it could make a good breakfast cake!

The thing that drew me in to this recipe, was the butterscotch sauce. Hot fudge is great on ice cream, but I’ve always been a sucker for a good butterscotch sauce! Combine that with the toffee pudding, and you’ve got a winner for me!

You may have now noticed, that I dove headfirst and explored Tania’s Kitchen this week! She as some great recipes beyond these three here! I always like to have an assortment of things out when I have friends over for dinner, and these look not only super yummy, but also super easy to make! They also look portable, which is a must for parties when most people are standing around, talking!